The Silverstone Half Marathon - 10th October 2021

The Run Silverstone races are a highlightr for anyone who loves to run on the Race Track which is the hiome of the British Greand Prix.
5k, 10k and Half Marathon races were held on a windy Silverstone course.
2:36:43     Graeme Hackland

A focal point for British marathon running, the London Marathon moved from its traditional April date to October in 2021 as both a physical and virtual race.
Lisa Moulder won the Harriers place (see her race report below); Steve Frame won a place in his employer's ballot (6 weeks out of the marathon) - see his run report below. Graeme and Tori also had an amazing day on the streets of London!
5:08:30     Steve Frame
5:10:41     Victoria Manley (Ryde)
5:58:17     Graeme Hackland
6:24:37     Lisa Moulder 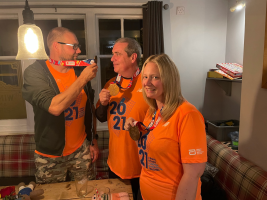 I was successful in gaining the club place for the London marathon 2020 in December 2019. I trained solidly and got to my peak fitness by march 2020 and then came the covid pandemic and we went into lockdown. After my place was guaranteed for 2021, It was touch and go for a while trying to find motivation, early this year I found it and even though I wasn't sure if it would even go ahead I started training. After a couple of months I was regaining fitness and seeing improvements and suddenly after a 12 mile training run I got a knee injury, after hospital appointments etc it sadly set me back six weeks before I could run again! This was so frustrating.. I decided when I was fixed I would do couch to 5k. To slowly build up again which left me with 14 weeks to get the miles and training in! However worrying I actually managed it and got up to 20 miles 3 weeks prior to London!!
Now the London marathon was my 2nd time. This time round I found it less daunting going to get my number or travelling in the morning because I knew what to expect, so thankfully no pre nerves set in, I was actually excited!! Now what I would of liked to achieve in time wise I knew was out of the question because of a number of factors and I wasn't as fit as 2020. This however didn't stop me trying! The morning of the marathon after initial meet up with Steve before he set off in his wave, I spent the next 50 mins in a toilet queue! Once that was done I got to see Graeme before my wave went which was one before his. Now it was 10:39am and I was able to set off in my wave! I crossed that line and instantly felt emotion filling in my eyes, realising it was actually happening and I was back here again! Now the first 3 miles are separated from the other coloured starts and they then all merge together, my start was RED and as I got to mile two and was just setting down a big hill, Graeme caught me up! We started to run together and I told him my intial plan was to do it in 5:30 hours (which I know if I was peak fitness i could do) but was probably a little ambitious, however it kept me focused having a little goal in mind. Now being this was the first London marathon and not knowing what the atmosphere would be like I can honestly say I should not have been worried! The crowds were lined on the streets cheering, with loud music and African drummers, steel bands, the list goes on. I ran with Graeme up until 13 miles which was amazing!  We ran past cutty Sark together and the iconic tower bridge! They were two of my favourite moments of the race! I saw some family and running friends just before tower and this gave me the boost I needed. Tower bridge was electric I have to admit I welled with excitement and emotion running over the bridge and then we came round to reach the half way point and I slowly started to crumble. I was hungry but didn't want anymore sugar, getting a little tired (probably as that's the quickest half of ran this year) but I dig deep and kept shuffling where I could and Kendal mint cake was a godsend and found me some energy quick. Miles 15-18 were a blur to be honest and I kept thinking, I need to get to 18 and I'll see my partner Rob, I got there and then we had a very large downpour of rain. I actually liked it  [?]  it was refreshing and I get rather warm running so I wasn't complaining! Here to 21 miles I kept going, saw Rob again and then it was to make it to the end. Once I got to tower of London and made my way down to the embankment it started to hit me that I was only a parkrun away! The crowds here were still awesome shouting my name and encouraging me, so lovely to hear random people coming out to support us! I got to mile 24 and decided I'd have a quick toilet break and then I passed the London eye and saw Westminster right in front of me! I passed the 1km to go mat and that was it! Whatever was left in my legs I used and ran as fast as I could past Big Ben, up birdcage walk towards the 600m to go sign where family & friends were cheering again! I had Robbie Williams let me entertain you playing on my boneless headphones and I saw Buckingham palace ran round the corner and there it was the finish line! I knew I just wanted to get there by this point! I smiled put my hands in the air and ran to that line! I knew I may have not got my plan of 5:30 by far, however I was on got a course PB from the last time I did London and wanted that! I came over the line in 6:24:37 knocking 5 mins off my first London marathon! It was an absolute amazing day despite the pain! I have now completed 6 marathons and this one is by far my favourite (except the Isle of dogs and canary wharf section), purely because the whole of London and the wider communities come together to cheer little old me on from Hook Norton Harriers. I'm so thankful to have had the experience to run this race again and incredibly proud of myself. This might be my last marathon for a few years however, the experience will last a lifetime!

A race of two halves
The build up to LDN is always exciting, despite not being a huge fan of the big smoke the marathon experience always blows me away. The new wave start system, I thought worked really well. My wave was supposed to start at 10:06 and my official start time was 10:06:05, pretty accurate!
The first 10km passed really quickly the only thing to note was a lot of shouting from me to other runners to keep left for a wheelchair athlete that started in our wave. A lot of runners were blissfully unaware of him as he used the downhills to his advantage. He would pull away from me downhill and then I would catch him on the ups and the shouting continued for a while.
At 16km my race started to change, I felt my left knee starting to buckle slightly every couple of strides. I took a brief pause to stretch  and hoped that it was nothing more than a repeat of a prior niggle and carried on although I reigned in my pace slightly. I passed through Cutty Sark taking the time soak up bits that I had completely ignored 4 years earlier. I was determined to get to Tower Bridge without walking, something I failed to do in 2017. The crowds were amazing they always are and they kept me going, I saw Jo Hambidge randomly and had a quick hug, such a lift, thank you! Turning right onto Tower Bridge is a special moment it’s a beautiful sight and knowing that you’re almost halfway is a great feeling.
This was where the second half of my race starts, my knee was getting worse, I cleared half distance and then stopped for a little walk. Walking was a relief and my knee didn’t hurt. After a minute I tried to run again but my knee caved almost immediately. I was gutted. Thousands of people shouting to keep running when I couldn’t and I knew how far was still left. I let people away from the race know I was struggling and the ensuing support was phenomenal, I was never ever not going finish, but all the messages of support helped me to keep holding my head up high when all I wanted to do was drop it low. Especially the thought of Lisa and Graeme chasing me down!  I kept going not stoping, occasionally trying to stride to no avail. At 38km just before the heavens opened I tried to run again. To my surprise my knee accommodated! I decided to try to finish with everything I had left and then to cap it all off we had a mini biblical downpour!
With the finish line in sight the sun broke through and in a flash it was all over. Family, friends and complete strangers all came together to help me through what was an unbelievably tough day and for that I can’t thank you all enough.
Reflecting on all this a day later has been quite emotion, I have tears in my eyes and smiles across my face in equal quantities as I write this down.
A final thank you to all who have donated to Helen & Douglas house, the money you gave will go to help families who are going though much worse situations than I went through yesterday. The respite, end of life care, and ongoing bereavement care they provide families of young children needs to continue and your money has enabled that.
LDN I will be back, we still have unfinished business.