Described by Sarah: Leamington Spa Half Marathon completed today. Started in the boiling hot sun and finished in the pouring rain! Lovely course with a mix of rural and urban and great selection of goodies- that you actually want - a bright orange t-shirt, elephant medal, bottle of water, and the one I appreciated the most: the banana! Would certainly recommend the event as long as the sort the toilets out at the start!

Not my best time for a half at 2.35.41 but it’s been a bit of a struggle the last two months with chest infection after chest infection so not as many training miles put in as I would have liked. Now let the official London Marathon training begin! 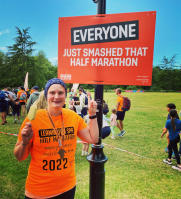 Described by the organisers: a 10K chip-timed race, taking runners on a sightseeing tour of Gloucester, including the cathedral, quays, canal and docks.

Described by the organisers:

Do you like beer? Do you like running? Will you run 2 miles for beer? This pretty much sums up the Tempo Run For Beer Relay.  A fun social drinking/running event where you run and then you drink!

Completing a two-mile run each in teams of 4 on a route around the beautiful Recreation Ground in Stratford-upon-Avon (you could start you drinking beforehand but that could get rather messy!)

Every runner receives a free bottle of beer (curtesy of our sponsor – Church Farm Brewery) on completing their 2-mile leg.

This is a really fun event.  Whilst there are a few running club teams battling it out at the front there are prizes for best fancy dress, fastest pub team and several others.  There will also be food available to buy on the night.

Here are the categories, ALL teams are eligible for the Fancy Dress prize: 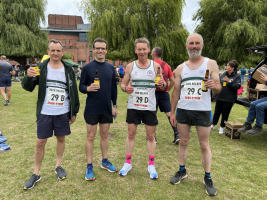