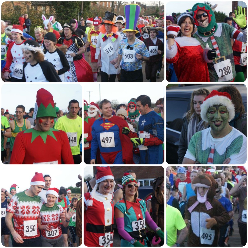 Thank you to everyone who came along and took part in the Christmas Canter today, for the first time since we've held the race it was a sell out, sorry to any of those who were not able to get a place on the day.

We enjoyed sunny weather conditions with the rain holding off until the last finisher crossed the line, and there were some fantastic fancy dress costumes to entertain the many spectators.

We hope you all enjoyed the race, and the post-race mince pie and mulled wine, and we look forward to seeing you again next year! 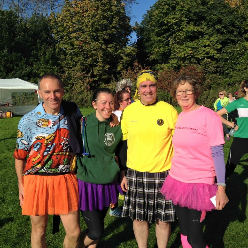 To mark the occasion they asked people to take part in neon/80s style fancy dress, amking for a very colourful spectacle.

Seven Harrier took part in the event, with 3 finishing in the top ten. 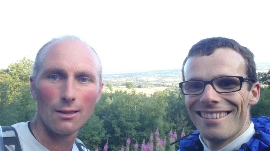 Dave Tame and Tom Bradford set themselves the challenge of seeing how much of the Cotswold Way they could cover in 24 hours, raising money for charity in the process. The Cotswold Way stretches 104 miles from Bath to Chipping Campden. We're pleased to confirm they managed to cover 79 miles, a phenomanal achievement, well done guys! 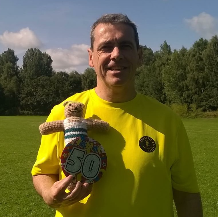 Graeme hit the 50 runs milestone at Banbury parkrun this weekend. Although Banbury is now Graeme's home parkrun, he ran regularly at Oxford and Abingdon before the weekly Banbury event kicked off in September 2014. Graeme has also run parkruns in South Africa and Australia. 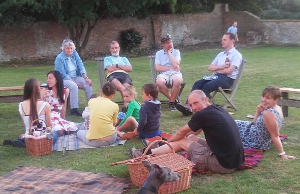 Jess and Jonathon kindly hosted the summer social again this year. There was a turn out of Harriers, and with the good weather we were able to picnic on the lawn, enjoying a wine or beer with our barbecued dinner. While some rested for races the following morning, others enjoyed a game of cricket! 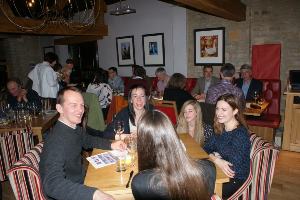 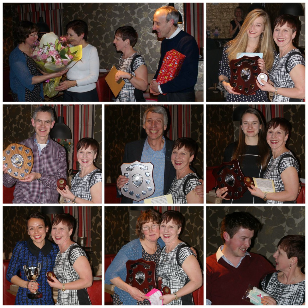 And the winners are...

Female Runner of the Year

Male Runner of the Year

The Hailey Award for services to the Harriers

And there was a special presentation for Dee and Mick Hailey to thank them for all their hard work over many years to make Hook Norton Harriers the club it is today!

Over the winter, a number of Harriers have been taking part in the Tempo Events Winter Series, a series of 5 hilly 10k races held in Ilmington, Warwickshire.

Congratulations to Hannah Rogan and Donna Allen who finished the series as second and third lady respectively! 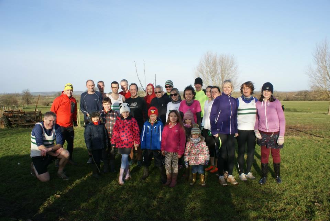 Club members headed to the Tame's farm for the Club cross country. All those who entered predicted their finishing time, before heading off together for 2 or 3 laps of the course. Results of who was under and closest to their predicted time won't be known until the Christmas Meal!

The Chequers on Thursday 11th December 2014 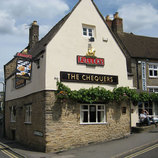 We will be going to the Chequers in Chipping Norton for food and drinks after a short training session on Thursday 10th December.  All Hook Norton Harriers welcome to come!

For directions to the pub please visit http://www.chequers-pub.com

Do we need a reason to celebrate? Autumn Marathons, PB's, life in general.  Pick a reason and come and join us for Supper on Tuesday 4th November at the Norman Knight in Whichford. We will run from Hooky as usual and then reconvene for food at 8:15ish.  All Hooky Harriers welcome, the more the merrier!

To sponsor him and this great cause please visit his fundraising page:

This years Summer Social will be held on the evening of Friday 29th August.  BBQ and drinks, music and frivolity.  In a change to last year, the social will be held at Burmington House, Shipston on Stour (CV36 5AF for Sat Nav) Only a 10 minute drive from Hook Norton.

All Hook Norton Harriers welcome - bring your lovely selves and all the family!

To celebrate the end of the Spring Marathons, we will be meeting for Supper on Tuesday 22nd April at the Norman Knight in Whichford after a short run from Hooky.  All Hooky Harriers welcome, the more the merrier!

A fabulous Night had by all!

Huge congratulations to all the award winners:

Click here for the evenings shenanigans as captured by Graeme