Hello fellow Harriers, I hope you are all keeping well!

Here is version 1 of our risk assessment regarding Covid 19 and Tuesday night running. May I ask all members take 5 minutes to read through this and familiarise yourselves with it before joining a Tuesday run.

If anyone has any comments or feedback do please let me know so that I can address them in future revisions.

As the ongoing circumstances change the risk assessment will be updated.

Thank you to everyone who contributed to the 2019 newsletter

The Origins of the Harriers - Steve Kaplan

Club Thong (for most amusing *?@! up) - awarded to Royston Williams for setting the female u18 course record and being first female finisher at Towcester parkrun today (he used his daughter's barcode).

Congratulations to all the Harriers who raced in 2019, so much was achieved by our fantastic runners! 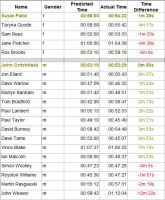 25-26th January for the NEC version in Birmingham

This year's social was held on 23rd February at the HNSCC, transformed for the occasion. There was live music, exquisite food and much dancing afterwards!

The NEC in Birmingham will be hosting the 2nd edition of the National Running Show. If you pop along, look out for Harriers in the trademark green!

On the 24th February 2018 Harriers shed their lycra and brought their partners to the new Brewery Malthouse Kitchen for a fantastic evening of food and fun. With Martin's musical talents and Sera's quiz what an evening!

The achievements of 2017 were celebrated:

The Hailey Award for Service to the Harriers - David Bannister

Oh, and Tom Footitt was awarded the Club Thong after a secret ballot on the night - dumping Victoria at parkrun on her birthday seemed the most popular reason! 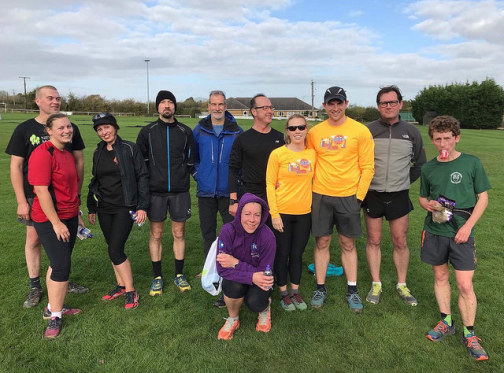 John Weaver came up trumps again with his annual cross country half marathon for club members. A slight change in the course this year, but fundamentally the same as last year, we saw 10 Harriers take it on, with John organising and popping up en-route, and Greame and Sandra providing much needed support and sustainance at crucial points! The Bucks Fizz at Traitors Ford was a particularly fantastic touch! ;o)

8 Harriers set off together at just a smidge after 9:30, Simon Pipe oversleft and followed on shortl afterwards and SImon Woolley started just after 10. There was some fine judging of pace with everyone bar Simon Pipe coming in within 6 minutes of midday! Simon, when he finally arrived, but on his winged trainers and zoomed round the course finishing 15 minutes early!!

The aim of the game in this one is to pick a start time and try to finish as close to, but before, midday. Having said that it's always far more of a social event than a race. I think Simon Pipe and Simon Woolley were pretty pleased with the bags of chocolate buttons for being first finisher and closest to midday respectively!

Thank you John for organising a great event, and thank you Sandra and Graeme for your support. Well done everyone on a lovely run. Good practice for the upcoming XC season!

The Harriers take over at Banbury parkrun! 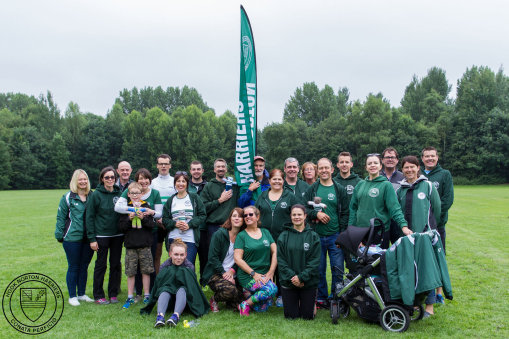 The Hooky Harriers takeover happened at Banbury parkrun on July 15th 2017. What a fantastic morning it was! The Harriers took on ALL the volunteer roles at the event from Run Director to Run Report Writer. We even took along a few tables and a gazebo under which Tom was able to tell lots of local parkrunners about our running club and what we can offer. Lots of Harriers took to the kitchen to bake cakes for the parkrunners, and Stuart kindly provided Teas, Coffee's and hot chocolate for the runners!

It went down a storm, and as well as lots of interest in the Hooky 6 race next month we had several enquiries about joining the club. All the Harriers enjoyed the morning and we're considering doing this maybe once or twice a year going forward, so keep your eyes pealed!

The Hook Norton Harriers will be taking over all the volunteer roles at Banbury parkrun on July 15th 2017. A chance for all local parkrunners, and tourists alike, to find out a little more about our running club, it's members, our races and what we're all about.

With just a few weeks until our annual summer road race, the Hooky 6, we'll have entry forms at the ready, and Harriers on all corners of the course to answer questions about that and all other things Harrier related!

Come and join us for Banbury parkrun and have a chat with the members there to find out if Hooky Harriers is the club for you! 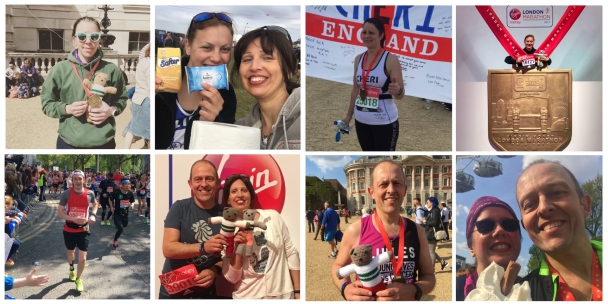 This years Virgin Money London Marathon saw six Harriers complete the race and many others travelled down to cheer them round the 26.2 miles. Everyone had a fantastic day, whether runing or supporting, despite a much warmer and sunnier day than predicted. The heat took it's toll on some of our runners who struggled with hydration and nutrition, but all our runners finished, and our first timers (Rachel, Cheri, Danny and Julian) and ran really well. 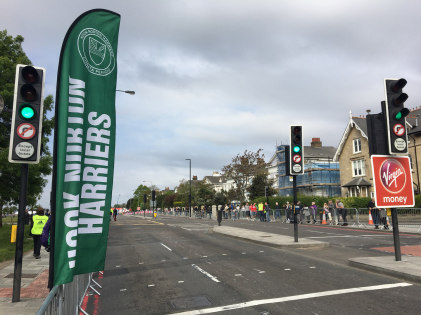 Our congratulations go to all our runners (Anwen, Danny, Rachel, Lisa, Julian and Cheri), and every other runner that completed this amazing race. We even managed to get the Hooky flag around the route (if not on the telly sadly!) to support our runners. Results of our Harriers and a link to the full results can be found here.

On the 25th February 2017 just before dancing the night away to live band Rhythm Street, the achievements of 2016 were celebrated:

The Hailey Award for Service to the Harriers - Sandra Heryet

Oh, and David Bannister was awarded the Club Thong by the Social Committee for admitting to parking on the start line of a Motavation race - what a legend! 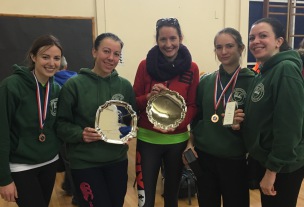 Well done to all the ladies who took part in the Oxon Grand Prix Series races and helped the Hook Norton Harriers Ladies secure the two trophies.

Super summer for the Ladies, July to Sept 2016 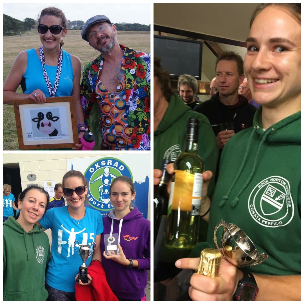 What a fantastic summer it has been for sport, and not just the Team GB olympians and paralympians, our Hook Norton Harriers ladies have been having an awesome time.

Have a look below at what our ladies have achieved over the last couple of months.

2nd team in the Series 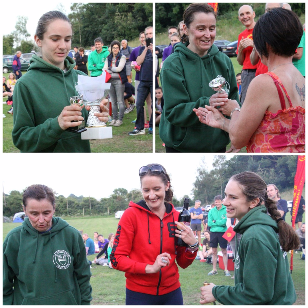 Another great evening for the Hook Norton Harriers ladies.

This race is the 8th in the Oxfordshire Grand Prix series, and with strong runs from Donna, Hannah, Samantha, Anwen Greenaway and Heather Claydon throughout the series, the ladies currently sit in 2nd place in the championship. Well done ladies. 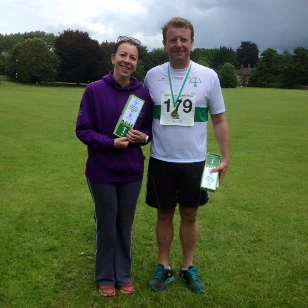 Anwen was one of 7 Harriers who took part in the various distance races organised by the Adderbury Running Club today. 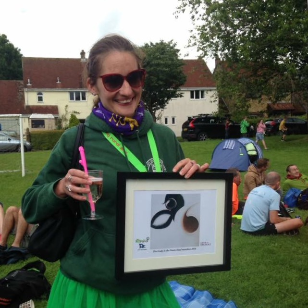 Huge congratulations to Hannah Rogan who had an awesome run, finishing joint 4th overall and 1st lady! Apparently Hannah's secret was having Baileys on her breakfast! 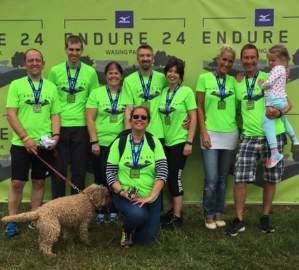 Well done to the 5​ Hook Norton Harriers who took part in the Endure 24 endurance race this weekend. Our 5 Harriers joined up with other regular Banbury parkrunners to form two teams to take part in this 24 hour solo and relay team edurance race on trails and footpaths around Wasing Park, near Reading.

Rachel and David Bannister, Julian Relton and Claire Upton have teamed up with Kate and Peter Sutton and Martyn Banham for a mixed team called Narky Urban Burp, while Sera Relton teamed up with Nina, Matt and Alex Pope, Daniel Vallance, Rose Durrant and Mark Smith in a team called SVO. 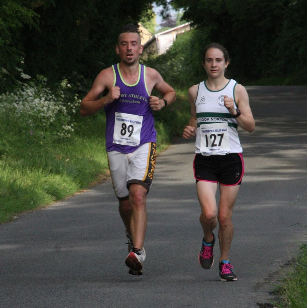 Congratulations to Donna Allen who finished first lady in Humph's Hilly Half today. As the name suggests, this is a hilly half marathon, starting and finishing is the picturesque Gloucestershire village of Bourton-on-the-Water, heading in an anti-clockwise loop through lovely Cotswold villages.

Donna made light work of this evening race, finishing over 5 minutes clear of the second placed lady. Well done Donna! 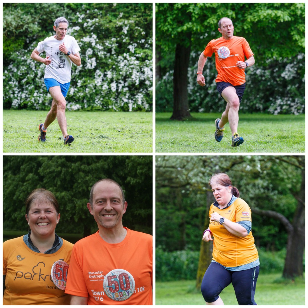 Well, we had not one, not two, but three Harriers reach their 50 parkrun landmark this weekend at Banbury parkrun. Well done to Huw Williams, Claire Upton and Julian Relton! 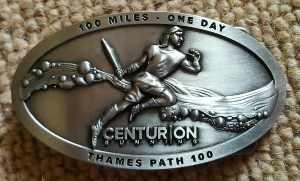 The Thames Path is an ultra running event, following the Thames Path from London to Oxford, covering 100 miles, with 1900ft of climbing, and a cut off time of 28 hours.

James McLaughlin took on the challenge this year with a target of finishing in under 24 hours. We're pleased to say James smashed that target, finishing in 23:04:43! Well done James, an amazing achievement! 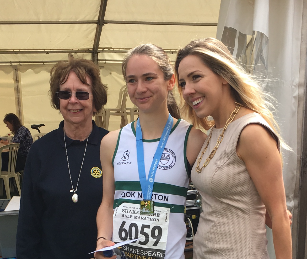 It was a good day for the Harriers at the Shakespeare Half Marathon. 10 members took part in the race, with no fewer than 7PBs!

And congratulations go to Donna Allen and Hannah Rogan, who finished 2nd and 3rd lady respectively! 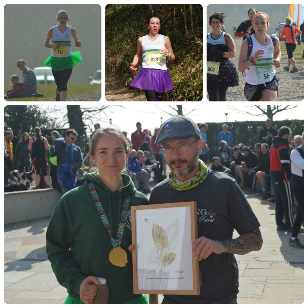 It's been a great weekend for long runs for the Harriers. Lisa Preston, Hannah Hagger and Caroline Harrison headed to Silverstone grand prix circuit for a half marathon, while Paul Taylor travelled down to Bath for his first half marathon.

Meanwhile 6 Harriers headed down to Dorset/Wiltshire for the Larmer Tree races. Paul Cooper took part in his first marathon with wife Kelly, with Donna Allen, Anwen Greenaway, Jess Woolcott and Sandra Heryet running the half marathon.

All did fantastically well, but 3 deserve a special mention.

In the Larmer Tree Half Marathon, Anwen Greenaway came in 4th lady and 2nd in category. 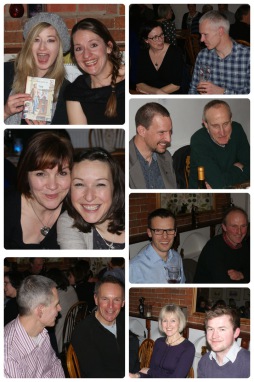 It's that time of year again when we see how well the Harriers scrub up and we get together to celebrate the achievements of the club and our members over the last year. 29 Harriers headed to the Cherington Arms, not a running shoe in sight, to enjoy a good meal and great company.

It has been a fantastic year for the Harriers. We have welcomed 17 new members, taking our membership to 60. We have seen a big increase in the numbers of members attending races, both club races and others, with an incredible 13 Harriers qualifying for the Club Championship this year. And not only running, we've had members taking part in obstacle races, triathlons and the Original Mountain Marathon.

The club organised races were again a huge success, wit positive feedback for both the summer Hooky 6 and winter Christmas Canter, with the latter selling out this year!

We've had some inspiring individual performances too. Samantha Rees achieved Diamond Standard for 5m, 10k and half marathon. Anwen Greenaway had a fantastic year achieving PBs at every distance from 5k to marathon and claiming Gold Standards for 5k, 5m, 10k, 1/2 and full marathon. And of course Donna Allen, as you'll see below, had a great year, running further and faster, achieving podium finishes in numerous races.

And finally, a big well done to all members. There has been a friendly competitiveness this year, at training sessions and races, which has helped many to improve over the course of the year and achieve their goals. We wish you all success for 2016, whatever your goals.

Click on the link below to download a copy of the Harriers newsletter, Running Commentary 2015, published for the Social. 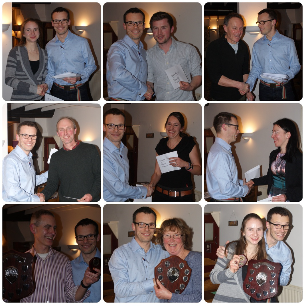 And the winners are...

Female Runner of the Year

Male Runner of the Year

The Hailey Award for services to the Harriers 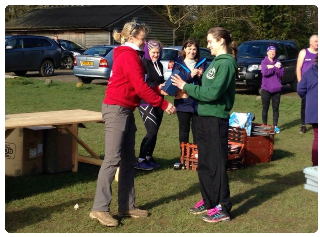 Congratulations to Donna Allen who finished first lady in the 5 race Tempo Events WInter Series in Ilmington. Donna finished in the top 2 in all the races this series to claim a magnificent win. 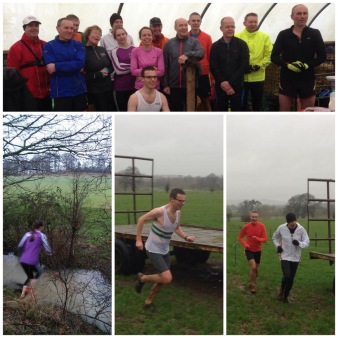 Held at the Tame's farm again (thank you Rachel and Dave), the course was two laps of farmland, taking in a testing hill and a stream crossing. All those who entered predicted their finishing time, the winners being the lady and gent who were under and closest to their predicted time. The winners will be revealed at the Awards Dinner on 27th February!